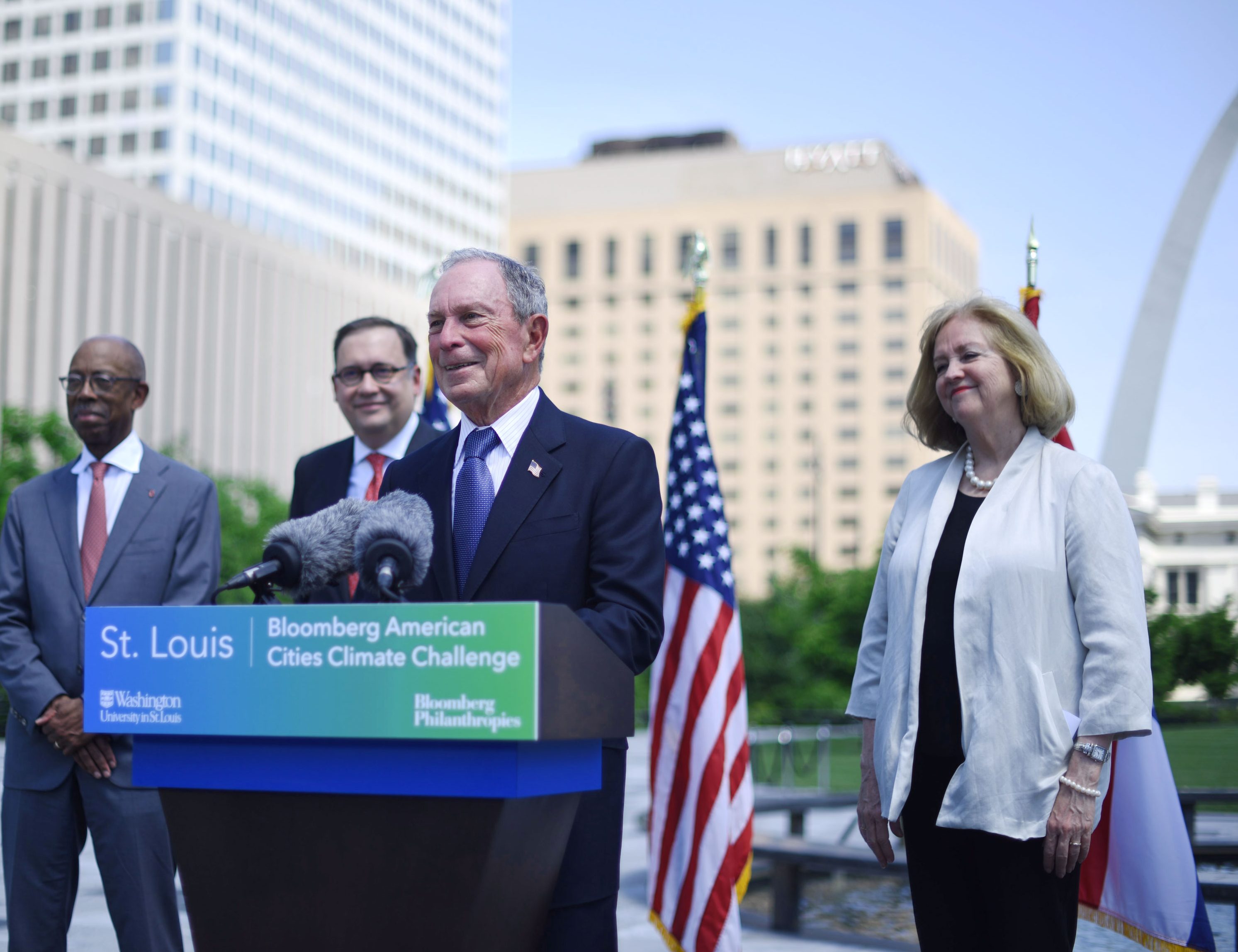 Our Highest Office, My Deepest Obligation

I’m not running for president, but I am launching a new campaign: Beyond Carbon.

I’ve never made any secret of my belief that Donald Trump is a threat to our country. At the 2016 Democratic National Convention, I said: “New Yorkers know a con when we see one.” Last fall I spent more than $100 million supporting Democrats in the midterm elections. Republicans in Congress had failed — and are still failing — to fulfill their constitutional duty to hold the president accountable. Instead, they indulge his worst impulses and refuse to work with Democrats on the most urgent issues.

It’s essential that we nominate a Democrat who will be in the strongest position to defeat Donald Trump and bring our country back together. We cannot allow the primary process to drag the party to an extreme that would diminish our chances in the general election and translate into “Four More Years.”

Many people have urged me to run. Some have told me that to win the Democratic nomination, I would need to change my views to match the polls. But I’ve been hearing that my whole political career.

I’ve run for office three times and won each time, in no small part because I’ve never stuck my finger in the wind to decide what I should believe. It’s not who I am, nor do I think it’s what voters want in a leader. They want someone who levels with them, even when they disagree, and who is capable of offering practical, sensible, and ambitious ideas — and of solving problems and delivering results.

I come out of the business world. I’ve had executive jobs in both the private sector and government. Finding solutions to tough problems is my life’s passion. My skills are in building and leading teams that draw up innovative plans and then work together to implement them. I think this is exactly what our country needs in a president, especially after what will be four years of chaos, disruption, and deceit.

I know what it takes to run a winning campaign, and every day when I read the news, I grow more frustrated by the incompetence in the Oval Office. I know we can do better as a country. And I believe I would defeat Donald Trump in a general election. But I am clear-eyed about the difficulty of winning the Democratic nomination in such a crowded field.

There is another factor that has weighed heavily on my mind: the likelihood that our biggest national problems will worsen over the next two years. With a leader in the White House who refuses to bring the parties together, it will be nearly impossible for Congress to address the major challenges we face, including climate change, gun violence, the opioid crisis, failing public schools, and college affordability. All are likely to grow more severe, and many of the president’s executive actions will only compound matters.

I love our country too much to sit back and hope for the best as national problems get worse. But I also recognize that until 2021, and possibly longer, our only real hope for progress lies outside of Washington. And unlike most who are running or thinking of it, I’m fortunate enough to be in a position to devote the resources needed to bring people together and make a big difference.

Since leaving public office, I’ve created and supported initiatives that are rallying citizens and leaders of cities, states, businesses, and nonprofit organizations to take action on their own. Like me, most Americans want to improve their communities and get things done. Together, we’ve shown that’s possible even without help from Washington.

I know there’s much more we can accomplish over the next two years, but only if we stay focused on the work and expand upon it. And the fact is: A national presidential campaign would limit my ability to do that.

So as I’ve thought about a possible presidential campaign, the choice before me has become clear. Should I devote the next two years to talking about my ideas and record, knowing that I might never win the Democratic nomination? Or should I spend the next two years doubling down on the work that I am already leading and funding, and that I know can produce real and beneficial results for the country, right now?

I’ve come to realize that I’m less interested in talking than doing. And I have concluded that, for now, the best way for me to help our country is by rolling up my sleeves and continuing to get work done.

Here’s one way I’ll do that. In 2011, following the failure of cap and trade legislation in Congress, I teamed up with the Sierra Club on a campaign called Beyond Coal. By organizing and mobilizing communities affected by the harmful pollution of coal-fired power plants, we have helped close more than half the nation’s plants — 285 out of 530 — and replaced them with cleaner and cheaper energy. That was the single biggest reason the U.S. has been able to reduce its carbon footprint by 11 percent — and cut deaths from coal power plants from 13,000 to 3,000.

Now, I will take the next big steps. First, I will expand my support for the Beyond Coal campaign so that we can retire every single coal-fired power plant over the next 11 years. That’s not a pipe dream. We can do it. And second, I will launch a new, even more ambitious phase of the campaign — Beyond Carbon: a grassroots effort to begin moving America as quickly as possible away from oil and gas and toward a 100 percent clean energy economy.

At the heart of Beyond Carbon is the conviction that, as the science has made clear, every year matters. The idea of a Green New Deal — first suggested by the columnist Tom Friedman more than a decade ago — stands no chance of passage in the Senate over the next two years. But Mother Nature does not wait on our political calendar, and neither can we.

The same applies to gun violence. Congress has not passed a major gun safety bill in nearly 25 years. Last week the Democratic House voted to approve a bill strengthening the background check system, but the Republican Senate is virtually guaranteed to block it. Nevertheless, thanks to strong grassroots efforts that we have spent years organizing and mobilizing, 20 states have passed stronger background check bills or adopted other laws that help keep guns out of the hands of dangerous people. But 20 states is not enough, and we can’t stop now given the risks to our country.

Gun violence and climate change are not the only urgent challenges where we must make progress even as Washington continues to ignore proven solutions.

We know how to improve public schools and dramatically reduce the racial achievement gap. We did it in New York City, by raising standards, increasing accountability, and giving our children the education they need to thrive in today’s knowledge- and technology-based economy.

We know how to increase access to college for low-income students. My foundation is doing just that, by working with colleges to increase financial aid and recruitment, and giving high school students more support with the application process.

We know how to reduce opioid addiction; improve the quality of health care and access to it; and reduce homelessness on our streets. We extended life expectancy by three years in New York City, and I’m working to help other cities make similar progress.

We know how to strengthen local communities, by investing in civic leaders and the innovative work they are doing to tackle our nation’s challenges from the ground up. This is a central focus of my foundation’s work, and it is where answers to many of our toughest challenges lie.

And we know that to protect our democracy, we need to organize to protect every citizen’s right to vote.

On these and other issues, Washington is unlikely to take effective action over the next two years. Progress depends entirely on the rest of us.

In the weeks and months ahead, I will dive even deeper into the work of turning around our country, through concrete actions and results. And I will continue supporting candidates who can provide the leadership we need — on climate change, gun violence, education, health, voting rights, and other critical issues — and continue holding their feet to the fire to deliver what they promise.

I hope those who have urged me to run, and to stand up for the values and principles that they hold dear, will understand that my decision was guided by one question: How can I best serve the country?

While there would be no higher honor than serving as president, my highest obligation as a citizen is to help the country the best way I can, right now.

Get involved.
Sign up for communications from Beyond Carbon, its partners, and other similar organizations.